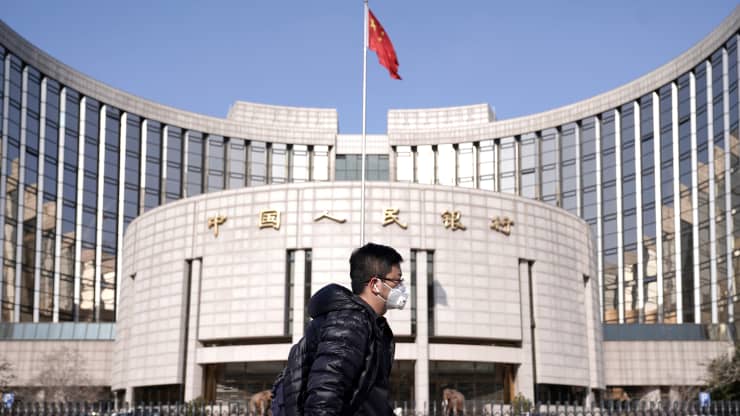 BEIJING — China has recovered so rapidly from the coronavirus pandemic that authorities are pulling back support for the economy more quickly than they did following the 2008 financial crisis, according to Allianz.

Back then, massive Chinese stimulus helped boost growth worldwide. This time, China’s focus on tackling problems at home will not provide the same kind of global support, senior economist Francoise Huang said in a note Monday.

Beijing’s monetary easing policy, which includes lower interest rates, kicked off in January 2020 after an acceleration in the spread of Covid-19 domestically. The support reached its height nine months later in October, with only 41% of the intensity seen following the financial crisis, Huang said, citing proprietary analysis.

That means China’s coronavirus stimulus program ended three months earlier than the 12-month-long one in 2009, according to the research.

China’s economy grew 2.3% last year and was the only major country to expand amid a global recession.

Stringent lockdown policies and restrictions on international travel allowed China to return to growth by the second quarter of last year with only pockets of new virus outbreaks. In contrast, the U.S. is still reporting tens of thousands of new cases a day, while the European Union is bracing for a third wave of the coronavirus.

Stay-home measures and other restrictions on business activity have prompted governments in those regions to enact their own support measures. In particular, the U.S. under President Joe Biden launched a $1.9 trillion stimulus package this month.

That has global implications, including for China’s policymakers.

U.S. “super stimulus” could increase China’s exports to the U.S. this year and next by $60 billion, Huang said, citing estimates from Allianz’s subsidiary Euler Hermes.

That sort of demand for Chinese goods adds to the already resilient domestic economy, giving authorities more leeway to address local problems without being too concerned about hurting growth.

“The aim of China’s policy tightening is more about financial vulnerabilities and addressing the risk of overheating in the real estate and financial markets,” Huang said.

However, Huang does not expect rate hikes or high-profile measures “that could signal a policy cliff and jeopardize the economic recovery,” but rather more subtle changes.

In a sign of how Beijing is taking a moderate approach, the People’s Bank of China on Monday kept the loan prime rate — a benchmark for lending costs — at the same level in March for an 11th-straight month. The last time the central bank changed the rate was a cut in April 2020.