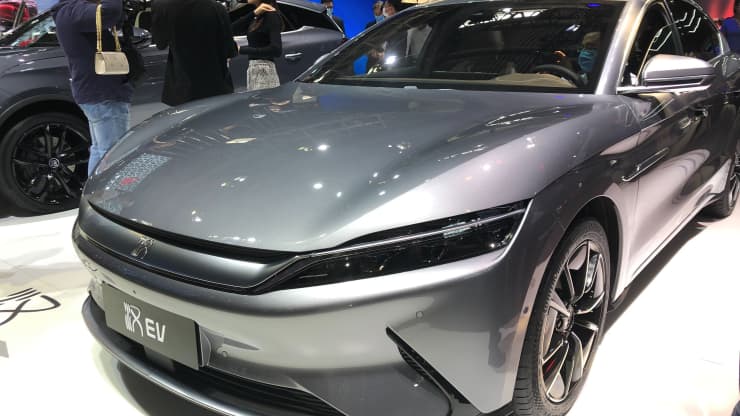 Backed by U.S. billionaire Warren Buffett, the automaker announced late Monday that net profits attributable to shareholders in the first quarter will be between 200 million yuan ($30.4 million) and 300 million yuan.

“Affected by the price fluctuation of upstream raw materials, the profit of automobile business is yet to be improved,” BYD said in a release, noting seasonal factors also “have a certain impact” on new energy passenger vehicle sales.

In a growing market for electric cars, demand for the batteries to run them is rising. As a result, Goldman Sachs analysts said in a March 18 note that the prices of the main materials will surge, driving battery prices about 18% higher.

The lower-than-expected first quarter guidance only accounts for 3% to 5% of what analysts are expecting for the full year, Credit Suisse analysts said in a note Tuesday. They lowered their price target on BYD’s Hong Kong-listed shares to 280 Hong Kong dollars, down from 310 Hong Kong dollars previously.

But that new target still implies a gain of more than 60% for BYD from its close Tuesday of 170.40 Hong Kong dollars.

BYD reported net profits attributable to shareholders of 4.23 billion yuan for all of 2020. The revenue share of automobiles and related products grew to 53% last year, up from 49% a year ago, while that of batteries remained the same at about 8%. The share of revenue from outside Greater China climbed to 39% from 16% a year ago.

While new electric vehicle models in a growing market helped boost those profits, Nomura analysts pointed out the results come at the low end of the estimated range as “higher raw material costs have affected near-term profit growth.” Nomura maintained its price target on BYD of 300 Hong Kong dollars.