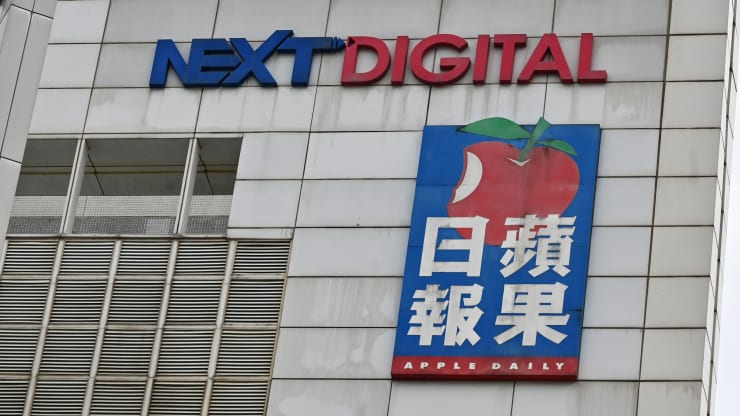 The pressure on Apple Daily leading up to its closure has raised concerns over press freedom in Hong Kong — a semi-autonomous region under Chinese rule.

It comes on the heels of the national security law that came into force last year, which Beijing says is aimed at prohibiting secession, subversion of state power, terrorism activities and foreign interference.

The logos of Next Media and Apple Daily seen on their headquarters in Hong Kong on June 22, 2021.
Peter Parks | AFP | Getty Images

Apple Daily said in a statement that its last print edition will be published on Thursday, and its website will not be updated from midnight. Earlier, the newspaper’s publisher, Next Digital, said in a separate statement that the publication will shut down no later than Saturday due to “current circumstances prevailing in Hong Kong.”

The newspaper has come under increasing pressure since its owner, media tycoon Jimmy Lai who is a strong critic of the Chinese central government, was arrested last year under the national security law. Lai is now in jail and some of his assets were frozen.

An advisor to Lai told Reuters on Monday that the newspaper will be forced to shut “in a matter of days” after authorities froze the company’s assets under the security law.

Last week, around 500 police officers raided the newspaper’s offices while some executives and staff were arrested on suspicion of colluding with a foreign country.

Hong Kong is a former British colony that returned to Chinese rule in 1997. At the time, China agreed to govern the city under a “one country, two systems” framework that would allow the Hong Kong people limited election rights and a largely separate legal and economic system.

The national security law in Hong Kong was implemented by Beijing last year without going through the semi-autonomous region’s legislature.

Critics of China — who include pro-democracy activists and some governments such as that of the U.S. and the U.K. — have accused Beijing of undermining Hong Kong’s autonomy.

We know all the correct procedures and rules governing services in Vanuatu.  Now we can impart that knowledge to you.  We are Trade Board Limited and we can help.  See our website at https://tradeboard.biz.