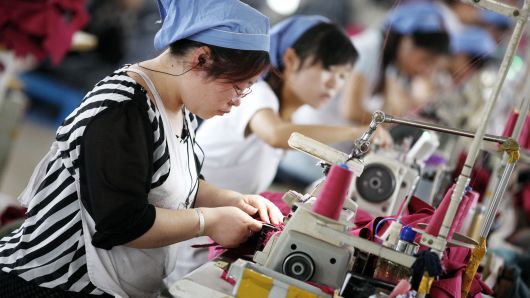 Chinese unemployment worries are growing as Beijing beefs up stimulus

Beijing is working hard to stop a slowing Chinese economy from hitting its workforce.

In the last several weeks authorities have made a flurry of announcements, including tax cuts, monetary policy loosening and plans to support public spending. The push comes as economic data points to sagging domestic growth and the U.S. looks set to keep up the pressure on trade. Amid that environment, worries of widespread job losses won’t help the already gloomy sentiment that’s giving consumers a second thought on spending.

The overarching worry for China’s leaders is that unemployment could lead to social unrest, and deeper questioning of the Communist Party’s claim to having a handle on the best interests of the country. Already, the economy is widely expected to slow from around 6.5 percent growth to just above 6 percent.

“We think the biggest risk in the near term is rising unemployment around the Lunar New Year,” Haibin Zhu, chief China economist and head of China equity strategy, J.P. Morgan, said in a Monday report.

Job losses in Chinese manufacturing accelerated in mid-2018 after the U.S. imposed tariffs

China’s biggest holiday, celebrating the Lunar New Year, falls on the first full week of February. Businesses are typically closed for one or two weeks as employees travel home to visit their families. For at least one factory in the export-heavy region of Guangdong, scattered posts on Chinese social media said that the closure began in early December and work isn’t expected to resume until March.

In a country infamous for heavy censorship, it’s not clear whether that early closure is indicative of a broader trend. But surveys point to growing job losses in the industrial sector, especially in the wake of last year’s U.S. tariffs on $250 billion worth of Chinese goods.

The firm’s survey in November found that 23 percent of 125 Chinese respondents in manufacturing have already laid off employees due to the negative effect of U.S.-China trade tensions. Some 34 percent planned to lay off employees in the next six months, and 18 percent had cut wages, the report said. The survey of chief financial officers covered a variety of private firms, state-owned enterprises and foreign-related ventures with significant export business or supply to exporters.

The job losses don’t appear to be relegated to just the manufacturing sector.

“We haven’t seen this degree of jobs weakness since the (stock) market panic of Q1 2016,” Leland Miller, chief executive officer of China Beige Book, said in an email. The firm publishes a quarterly review of the Chinese economy based on a survey of more than 3,300 Chinese firms.

“In Q4 employment growth weakened across every major sector, with the ‘new economy’ — retail and services — seeing the most substantial deterioration,” Miller said. “To call it broad-based is an understatement: job growth slowed in every region we track except the Northeast.”

How China got here

One of the key areas of pain is in privately run, as opposed to state-operated, companies. The private sector contributed to more than 90 percent of new jobs in 2017 and accounts for more than 60 percent of economic growth, according to a state media report last year. But in the fourth quarter, Miller said, hiring by private firms saw the greatest slowdown from the prior quarter that the Beige Book has ever recorded.

Private enterprises have struggled in the last two years as Beijing cracked down on their primary means of financing, the so-called shadow banking system. The giant state-owned banks prefer to lend only to state-owned enterprises, which are considered safer borrowers than private firms; China lacks a standard system for companies to prove they can pay back their loans.

After signs the shadow banking crackdown likely went too far, too fast, Chinese authorities tried to cut lending rates and encouraged banks to lend to small and medium-sized enterprises.

The government is also increasing job training programs in regions where trade tensions are having a greater impact, Meng Wei, spokeswoman for the National Reform and Development Commission said at a press conference in late October. She noted that U.S.-China trade tensions have caused some uncertainty in the labor market, and that the government has made stability in employment a priority. The commission is the state’s economic planning agency.

It’s unclear when and whether those initiatives will have a material effect.

The latest round of government stimulus compares with similar efforts around the stock market drop and economic slowdown during 2015 and 2016.

“But the situation is arguably worse this time, as the service-sector employers that previously absorbed many laid-off workers are now being squeezed by tighter regulations,” Gavekal’s Cui said in her report. “Government officials are trying to adjust and soften policies to help employment, but the outlook for household income and consumer spending in China in 2019 is clearly worsening.”

She did add, though, in an interview with CNBC that she doesn’t expect the labor market to worsen much from this point given the latest policy announcements — although trade tensions remain an uncertainty. Manufacturing also accounts for about 20 percent of the urban job market, Cui said, which means the industry’s challenges do not necessarily reflect the broader labor market.

The latest official figures state unemployment was at a low 4.8 percent in November. The Communist Party newspaper People’s Daily also ran an article on Sunday about how China’s employment market is generally improving overall versus recent reports of a “cold winter.”

And according to outside sources, the overall outlook, if not bright, does appear steady for now.

For the first quarter, companies are getting more clarity on government policy, Jacky Qian, vice president of ManpowerGroup Greater China, said in an interview with CNBC: “We can put ‘cautiously optimistic’ as the key word for the overall employment outlook.”

Qian noted that companies with more than 250 employees reported an above-trend employment outlook at more than 20 percent. The southern area of China, particularly Guangzhou, also showed slightly better hiring expectations at a net 11 percent, up from the prior quarter and year-ago period. Manufacturing, and wholesale and retail trade did have the lowest employment outlooks, while finance, insurance and real estate ranked the highest.