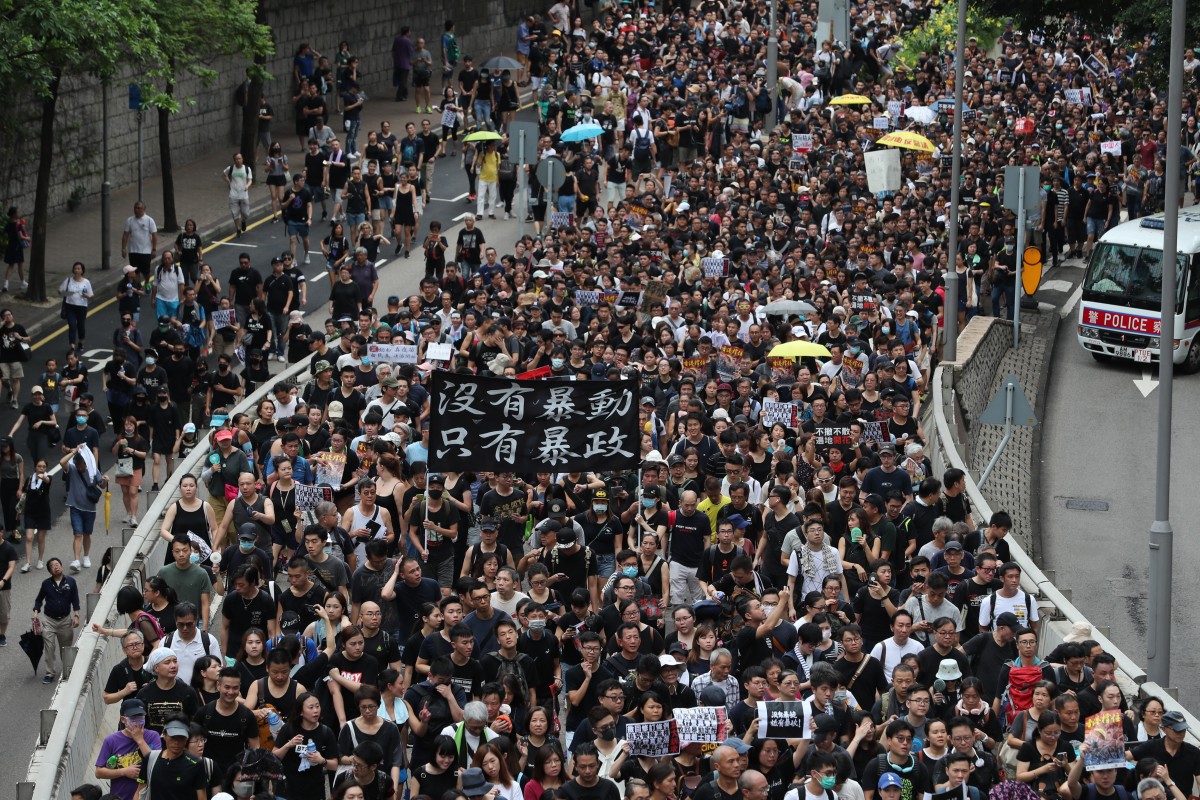 Over three quarters of 1,000 Singaporeans surveyed in June said they supported

– a result political analysts suggested was a reflection of the close-knit ties between the “twin cities”.

Still, the observers said the strong support level did not necessarily mean Hong Kong-style street politics would soon spring up in the strictly governed Lion City.

Singapore media have been covering the protests extensively, and the results of the poll – conducted by independent pollster Blackbox Research – are in sharp contrast to the reactions of commentators such as Singaporean ex-newspaper editor Leslie Fong.
In a piece for the South China Morning Post, Fong said “thoughtful Singaporeans” were “deeply saddened”by events that were unfolding in Hong Kong, and in an op-ed for The Straits Times, that Singaporeans were watching “in sadness and bewilderment” the television footage of the July 1 storming of Hong Kong’s Legislative Council building by protesters. 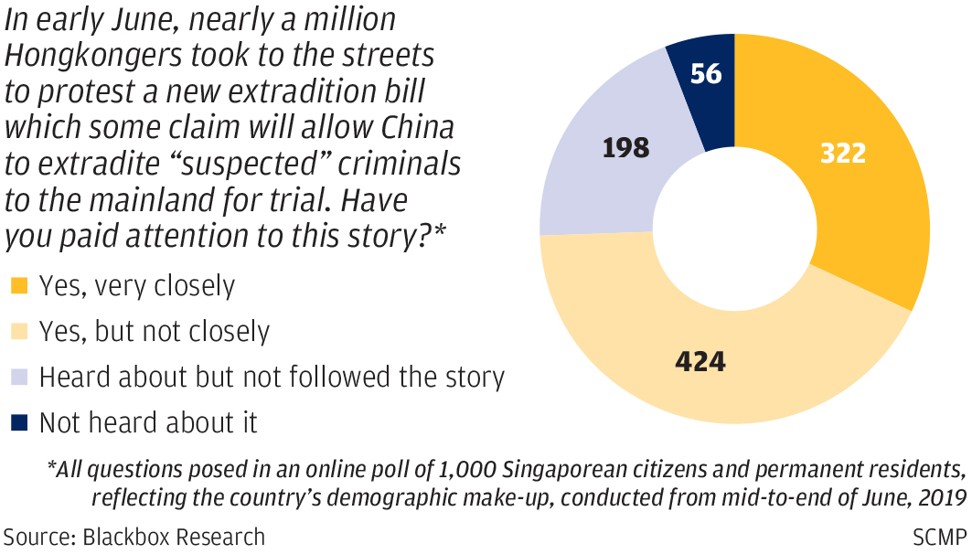 To a four-choice question on their views regarding Hongkongers’ concerns about the extradition bill, a quarter of respondents said they strongly supported those concerns, while slightly over half said they somewhat supported them.

In another four-choice question, three-quarters of respondents said they had been following the protests either “very closely” (32 per cent) or “not closely” (42 per cent). 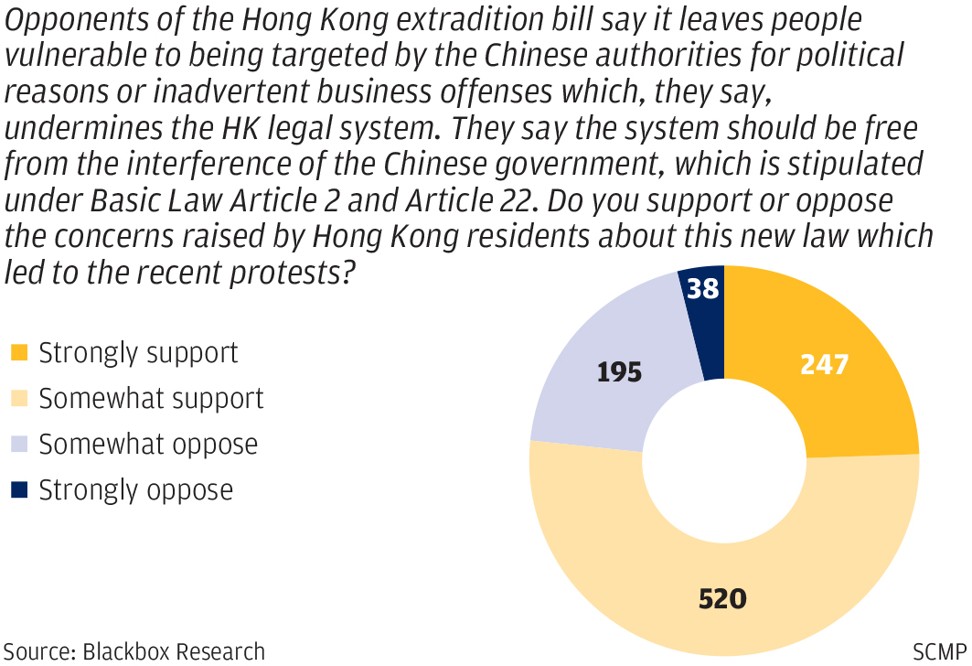 Blackbox attached the questions on the Hong Kong protests to a routine monthly questionnaire.

David Black, the pollster’s owner and managing director, said the results put paid to perceptions that Singaporeans were “bemused” by the Hong Kong protests.

Since early June, Hong Kong has been mired in its worst political crisis in decades because of the extradition bill – which would have allowed suspects to be sent to jurisdictions with which it lacks extradition agreements, including the Chinese mainland, to face trial.

Hong Kong extradition bill: this is no Singapore living in fear, this is a city ripping itself apart

Following a series of massive protests, one of which drew an estimated 2 million people, the government of Chief Executive Carrie Lam Cheng Yuet-ngor suspended the bill and apologised for the controversy.

Still, the protest movement has shown no signs of abating as several of its demands, including the full withdrawal of the law and Lam’s resignation, have yet to be fulfilled.

Further protests are believed to be planned over the next two weeks in Sha Tin and Tseung Kwan O. Besides several instances of hardline protesters clashing violently with police and causing property damage, the demonstrations have been otherwise peaceful. Protesters and the police both blame the other side for instigating the violence.

Has Carrie Lam lost Hong Kong in her bid to push through extradition bill?

Political observers offered varying reasons for the overwhelming support among Singaporeans for the Hong Kong protests.

“Singaporeans are used to always having to accept what the government says and they may admire Hongkongers for being willing and daring to stand up, even to China, which is so powerful,” said Ortmann, who has written about the history of student activism in Hong Kong.

Eugene Tan, a political observer and law professor, pointed to fraternal feelings between Hong Kong and Singapore as a likely reason for Singaporeans’ strong support for the protests.

Mental health, the victim on all sides of Hong Kong’s extradition bill crisis

“The empathy that Singaporeans have for Hong Kong protesters stems primarily from the conviction, passion, and sense of purpose that Hongkongers have shown, especially the younger generation,” said Tan, from the Singapore Management University.

He added: “The Hong Kong protests, before the violent storming of the Legislative Council building, will certainly be a reference point for Singaporeans if they are in a similar situation. It is about fighting on bravely even in the face of futility.” 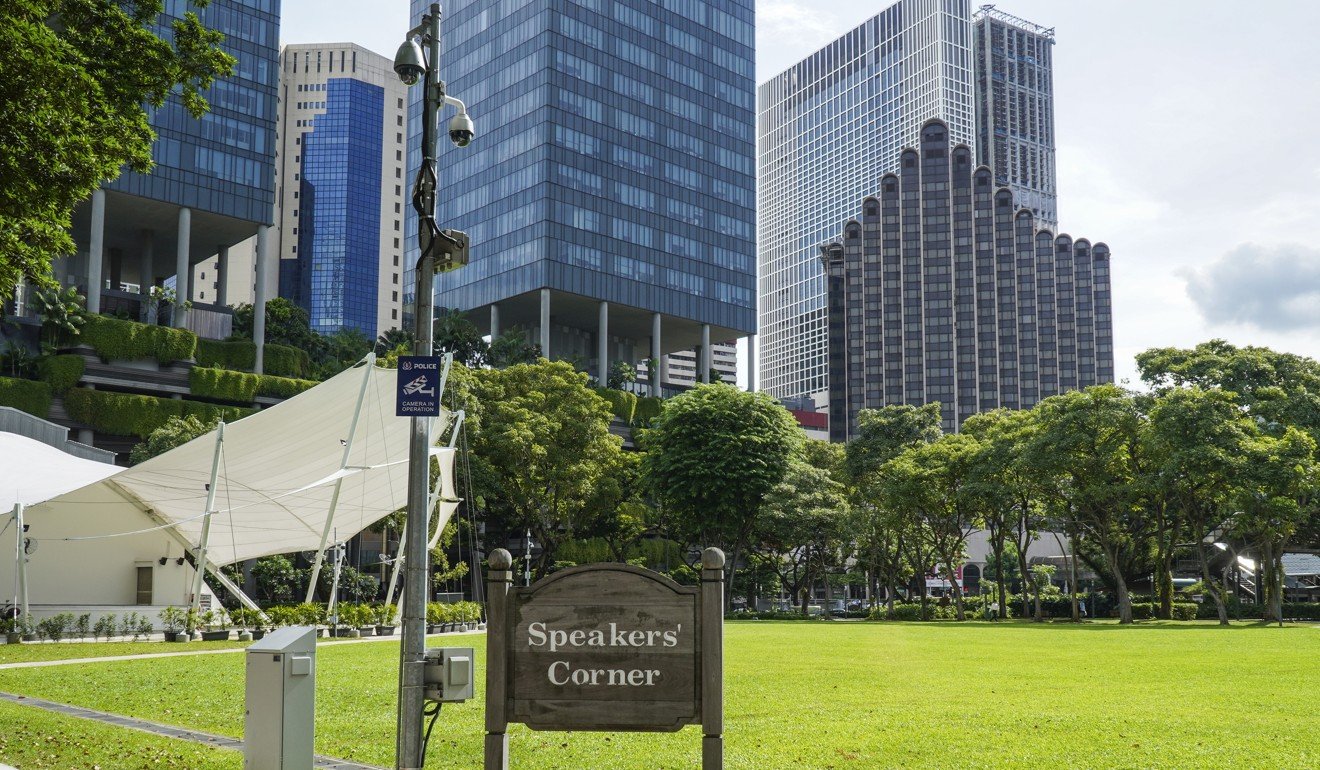 Speakers’ Corner, where citizens and permanent residents of Singapore may demonstrate, hold exhibitions and performances, and speak freely on most topics after prior registration on a government website. Photo: Roy Issa

Bilahari stirred controversy in June with comments on Facebook that the Hong Kong protesters had “lost all sense of reality” for going against the central government in Beijing.

In his comments to This Week in Asia, the ex-ambassador said the Blackbox poll results put on display “natural human feelings” of sympathy that Singaporeans had for Hong Kong.

What next for Hong Kong’s extradition bill protesters?

“I think the sympathy we feel is the sort one feels for a friend or relative that has become so desperate as to attempt suicide or has been diagnosed with cancer,” he said.

He dismissed the notion that Hong Kong’s street politics would have a spillover effect in the Lion City – which is poised to head to the polls in the next 12 months. 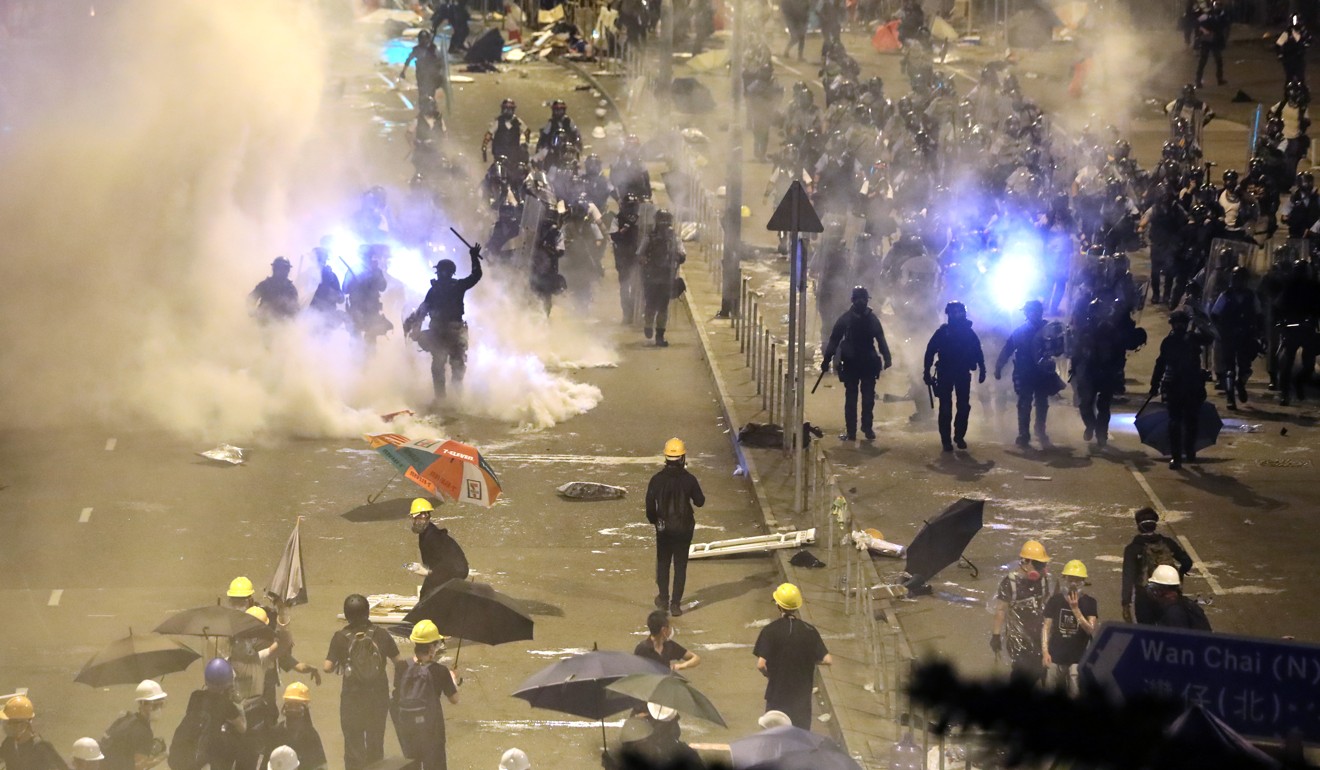 Protesters retreat as riot police clear the area around Admiralty in the early hours of July 2 after protesters stormed the Legislative Council chamber. Photo: Sam Tsang

“Attention and sympathy … does not mean that we want to emulate what is happening in Hong Kong or that we necessarily think that the rather inchoate goals of the demonstrators are realistic or achievable,” said Bilahari.

Tan, the law professor, said while Singaporeans “do not need to protest like their Hong Kong counterparts”, the events in the city would likely emphasise the importance of the public speaking about their concerns in a collective voice.

“The sense that young Hongkongers have nothing to lose or gain evokes among young Singaporeans a sense of profound identification with their Hong Kong contemporaries’ cause and conviction.”