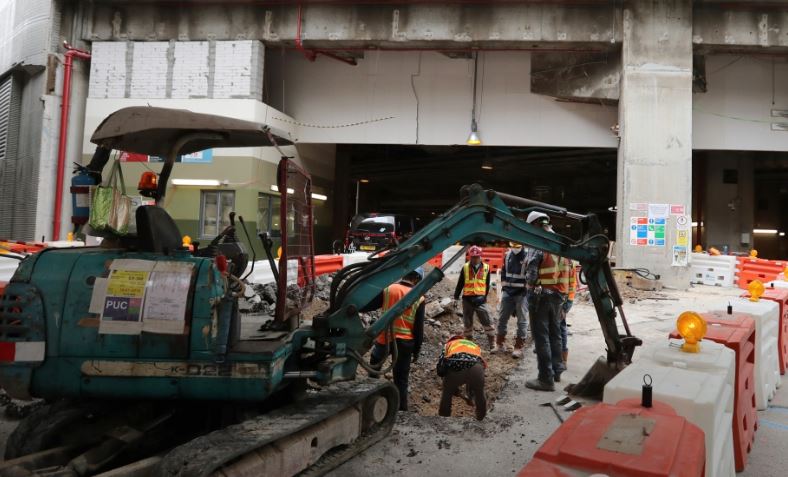 Hong Kong’s transport giant has played down the safety failures being unearthed daily at the city’s most expensive rail project ever, as it tried to scotch suggestions that it should rip up newly built platforms and start again.

The MTR Corp is in the process of breaking open at least 80 sections of two platforms at the station for the HK$97.1 billion (US$12.4 billion) line. At least 168 coupler connections for the reinforcement bars will be exposed for inspection. A final assessment is expected to be delivered by mid-March.

On Friday, lawmaker Michael Tien Puk-sun – himself a former railway boss – said he thought it “very likely the platform will need to be demolished”.

But on Monday Yim appeared to lower the safety standard. He said a coupler with six out of 10 screw threads inserted, giving an insertion of about 24mm, would be safe, though it was four threads short of correct installation. The threads are the slanted grooves which guide, and hold, the screw end into the coupler.

The threads cited by Yim are the slanted grooves which guide the screw end into the coupler. Photo: Dickson Lee

The government previously required that at least 40mm of each bar be screwed into its coupler, deeming anything less than 37mm substandard.

And as of Friday, six out of 10 bar samples were found to be below standard, according to officials. The worst case was a bar with just 6mm inserted into its coupler. The other five, as measured by ultrasonic machines, were in the range of 29mm to 36.78mm inserted.

So Yim’s lowering of the bar for insertion would render most of the inspected samples safe.

But lawmakers and other engineers said that was not acceptable.

“It’s pointless for anyone, including the MTR Corp, to say which is the bottom line. Because a standard maker can always lower a standard,” said registered structural and geotechnical engineer Ngai Hok-yan.

The earlier standard – of 40mm insertion – was consistent with the correct installation as suggested by BOSA Technology (Hong Kong), supplier of the couplers.

Kenny Lim, managing director of BOSA, declined to comment on whether he agreed with Yim.

“They didn’t follow our installation procedure, [which is] a workmanship issue,” he said.

“In terms of structural safety, they should find an independent expert to take lots of samples from us and verify the tensile strength of the threads.”

Jacob Kam Chak-pui, operations director of the MTR Corp, said the company would have to wait until all sampled connections were examined and analysed, to decide whether to rebuild parts of the platform.

“The MTR Corp is highly concerned and deeply disappointed … by the performance of [the main contractor] Leighton Contractors (Asia), and reserves the right to take legal actions,” he said.

Kam added that if any MTR staff were found to have “deviated from the company’s guidelines”, they would face disciplinary action.

“The team should intervene, requesting that Yim provide the full set of test data, and conducting site visits, to compile an independent and reliable test report,” Chan said.

Democratic Party lawmaker Lam Cheuk-ting, deputy chairman of Legco’s transport panel, said the MTR Corp could appear to be lowering safety standards to give itself leeway in further investigations.

“The MTR Corp will not require its contractor to insert just a part of a rebar into a coupler. If such handling is now considered acceptable, will contractors in the future only follow the lowered requirement?” Lam said.

A spokesman for the Transport and Housing Bureau said contractors should follow standards laid out by the government and the couplers’ supplier and the government reserved every right to take legal action against the MTR Corp and contractors involved.

The corporation should determine if the structure of the platform is safe, and if further reinforcement work is needed, in the third stage of the investigation, he said.

The government is the MTR Corp’s majority shareholder.